This special series invites you into homes of interesting people in interesting places. Read the other stories here.

Even as it lies at the foothills of the Himalayas in an intermontane valley, Dehradun, flanked by the Ganges and Yamuna rivers, sits at an elevation of 2,139 feet above sea level—a fact that lends it its mostly pleasant climate. The city was once known for its many fruit orchards and quiet way of life, but since being decreed the state capital of Uttarakhand in 2000, rampant overbuilding has changed the face of this once perfect mountain idyll.

How they got there

But despite the concrete juggernaut swallowing up the city’s pretty orchards and graceful architecture, one property has held on firmly to its old-world charm. “We just call it ‘The Dehradun House’,” says Sunita Kohli, of her multi-generational family dwelling that is heritage, heirloom and holiday home all rolled into one. Sunita is a designer, architectural restorer, Padma Shri award winner, and co-founder (along with her daughter, Kohelika) of the multi–disciplinary design and architectural firm K2India, and to her, this house is both oasis and anchor. “This was actually my husband’s primary home,” Sunita says. It was this house that she came to as a young bride, and it was only once their children started school that Delhi became their home base, and this, their second home. The Kohlis’ ties to Dehradun run even deeper though. Sunita’s husband, Ramesh Kohli, along with being a trustee of the Welham Boys’ School, is an alumnus of the Doon School, as are his son Suryaveer, and most recently, grandson Zohravar—which meant that the family visited the house in Dehradun all the time. “We were constantly there to attend the Founder’s Day celebrations, prize distributions and almost monthly parent-teacher meetings,” Sunita explains.

In its previous life, the pre-Partition, British era property was known as the Brentwood Estate, and comprised of an old English house with a warren of small rooms on a one-acre plot of land. It was purchased by the Kohlis in the early 40s, and Ramesh undertook its first reconstruction in the mid-60s. Dehradun, however, lies in a seismic zone, and frequent earthquakes along with cloudbursts meant that the house always needed repairs.

Old houses are more than just architectural novelties though. Like tree rings, they bear the imprints of time, of seasons, of their owners’ changing needs and sensibilities. The Dehradun House’s most recent renovation therefore, called for more than just repairs—it needed a reimagining. Enter Kohelika Kohli, Sunita’s youngest, and an architect in her own right. Kohelika took up the project treating it as an exercise in both conservation as well as renovation. While working on the structural strengthening, she was careful to retain aspects of her father’s original design—the long driveway leading to the front facade, the cantilevered porch and its buttresses made of rocks from local rivers. What she changed was the interconnectivity of the rooms, while also reinforcing the home’s connection with nature. The windows were enlarged to bring in both light and the outdoors, and the rear verandah was fashioned into an extension of the living and dining rooms. She also rebricked all the chimneys to get them working again—the cheerful family dinners in front of the fireplace are a happy consequence of that. 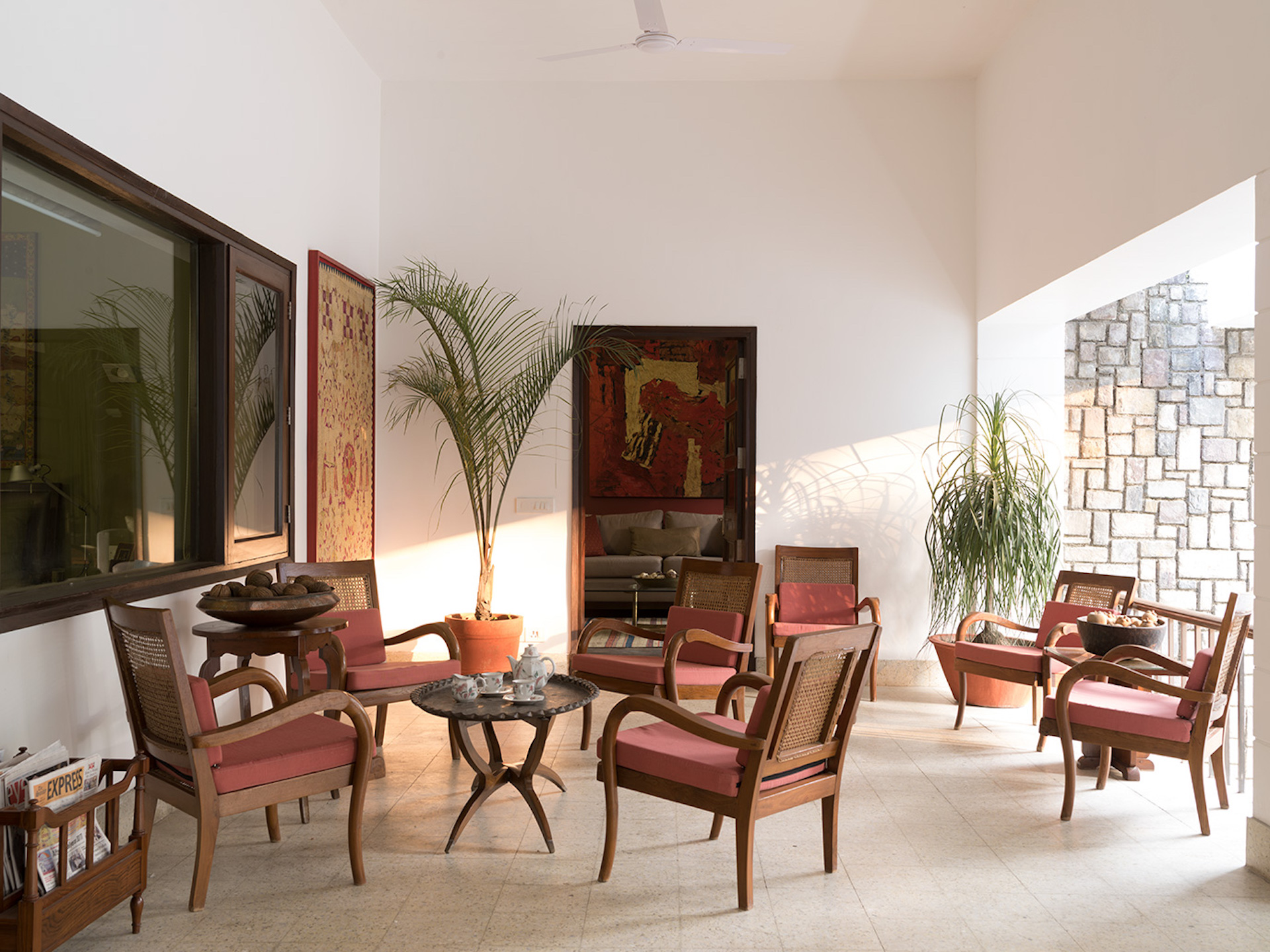