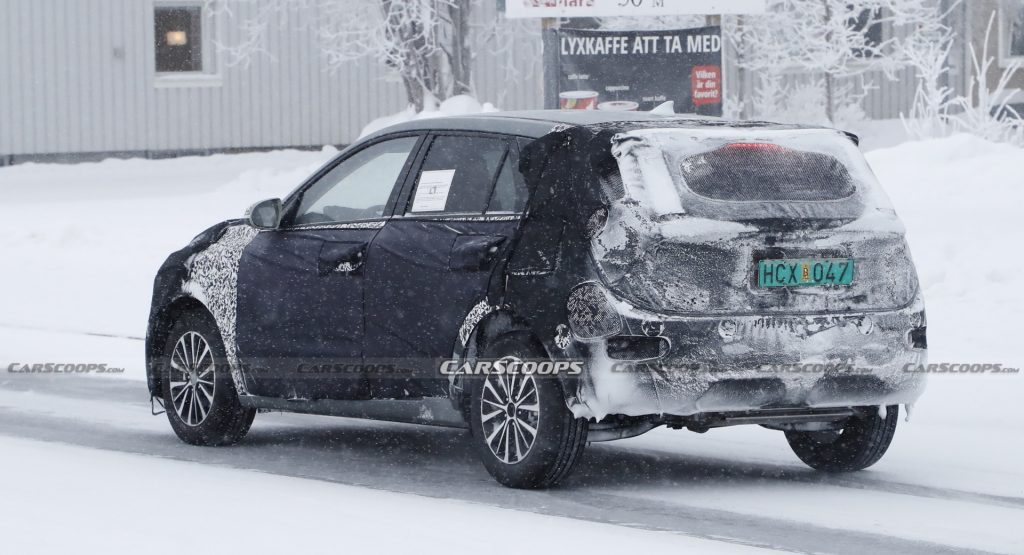 We first spotted this tester diving around about a month ago and we’ve spotted it again.

Spotted testing a colder, snowier day the new car sports designs inspired by the HabaNiro concept. Admittedly, they’ve been toned down quite a bit (and that’s an understatement).

Unlike last time, this one as a bit more dazzle camouflage hiding its gray paint, as well as different rims. The camouflage makes the oddly extended wheel arch flares a little harder to spot, but it makes them look a bit larger once you’ve noticed them.

As we reported in 2019, when the HabaNiro debuted, the concept is an all electric look into the future of Kia. It was designed by the brand’s California design studio is dripping with rugged style and futuristic touches.

Naturally, some of the wilder stuff will remain in the concept realm. But it’s not all fantasy. The snow makes it a little hard to see, but the car seen testing last month has boomerang style taillights, thick C-pillars, and an upright SUV-ish demeanor.

How much of that demeanor is down to the camouflage, though, is a little hard to tell. Both the head and the taillights are much lower than you’d expect given the silhouette drawn by the cammo. Kia has also clearly tried to hide some of what’s going on behind the rear windows and on the hood.

Either way, the images seem to indicate that the headlights have been moved farther down the front of the car.

We expect the wheelbase of Niro to extend a little, with overhangs shortening to give it a more purposeful appearance. Just what will go under the hood remains a mystery, but

we expect to find out in time for the 2022 model year.