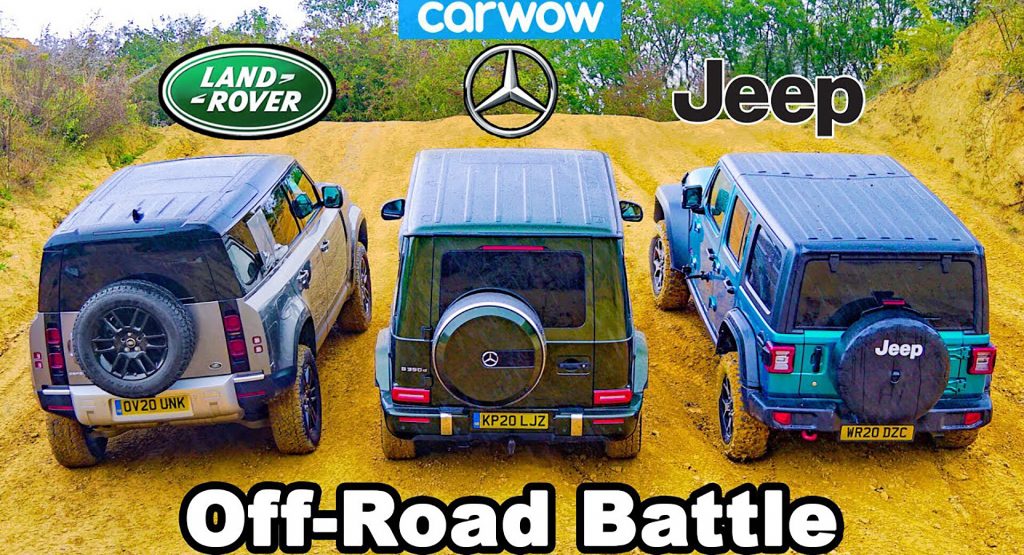 The Land Rover Defender has always been one of the best go-to options for those looking to venture off the beaten path. However, even since the all-new model arrived, many have been skeptical about how capable it is compared not only to its predecessor, but the competition as well.

In the video below, Carwow conducts various challenges to compare the new Defender, the Mercedes G-Class, and the Jeep Wrangler, and uses a points system to determine the winner.

The first challenge is an uphill drag race, and it sees the G-Class finish first, with the Defender second and the Wrangler far behind in third place.

The second challenge is the opposite: a downhill drag race where the slowest car wins. This challenge tests the cars’ ability to control their speed on descents, and we see the exact opposite of the previous result: the Jeep in first, the Land Rover close behind in second, and the Mercedes in third by a large margin.

The third challenge is a maneuverability test, which puts the SUVs through a short technical off-road course to see which can traverse it the fastest. This challenge sees a closer gap between three, with the G350d in first, the Wrangler in second, and the Defender in third.

Then there’s a scaling challenge, with the SUVs expected to make their way up a steep, slippery hill as fast as possible. The Mercedes does so effortlessly and finishes first, followed by the Defender and the Wrangler.

Read: Land Rover’s Shorter Defender 90 Is Getting A V8 Engine Too

Round five tests the contestants’ travel, as well as their approach, departure, and breakover angles. The Mercedes comes first, followed by the Jeep, then the Defender. The sixth and final test is one of articulation and ground clearance, and it sees the same finishing result.

Overall, the Mercedes finished first, with the Jeep and Land Rover tying for second. However, it’s worth noting that the results might have been different had the vehicles been spec’d more similarly.