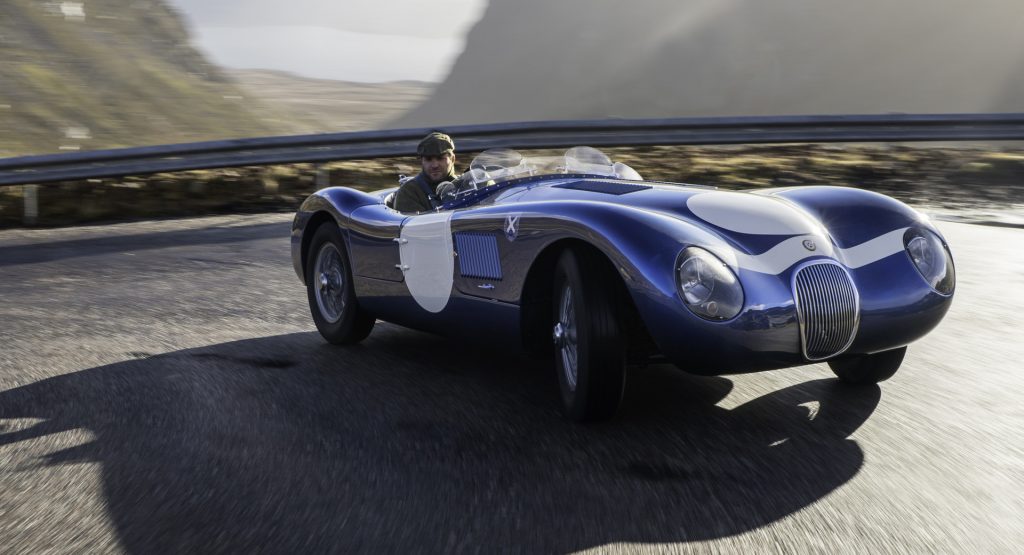 Ian Stewart and his Scottish racing stable, Ecurie Ecosse, raced seven C-Type chassis in period and now each is getting a sister car thank to a new company called Ecurie Ecosse. Metalwork for the seven sister cars will be done in Coventry, in the same building that was home to Jaguar’s coachworks at the time.

The chassis and body will be hand built by artisans, says Ecurie Ecosse, and a straight-six Jaguar XK engine will go under the bonnet. The body work, just like the original C-Types, will be made of thin gauge aluminum mounted to a spaceframe and there will be total fidelity in the shape.

Ecurie Ecosse has made some improvements, though. It argues that, since the racing team improved its cars for racing (and winning) at Le Mans, they can be allowed a few modifications of their own.

The Jaguar straight-six XK engine remains too but capacity has been increased to 4.2-liters to make a mighty, but manageable 300 hp. The higher power was doubtless helped by the addition of fuel injection, too. The team have also added bigger brakes to handle the extra power.

Mind you, the C-Type was already something of a technological marvel. Not only was its spaceframe at the cutting edge of construction, it was a testbed for some of the first Dunlop disc brakes, and it was the first race car ever designed in a wind tunnel.

“How better to celebrate the historic success of the Ecurie Ecosse C-types than to manufacture a batch of cars in their honor?” asks Alasdair McCaig, an Ecurie Ecosse patron. “Meticulous in their detail, like their forebears, hand-built in Coventry and tuned by Ecurie Ecosse technicians.”

If you’re wondering why someone would build reproductions of cars that still exist and sometimes race, a gander at RM Sotheby’s 2015 Monterey sale may help. The cars, famed for their success and their victory at Le Mans are highly prized. And since there are only seven, opportunities to buy one don’t come up very often. Indeed, at that sale, one of the cars sold for more than $13 million.

As you can see in the video above, Ecurie Ecosse has completed the first car. How long the rest will take is left to the imagination, as is the price tag. We suspect it will only be a bargain if you consider it against the real car.