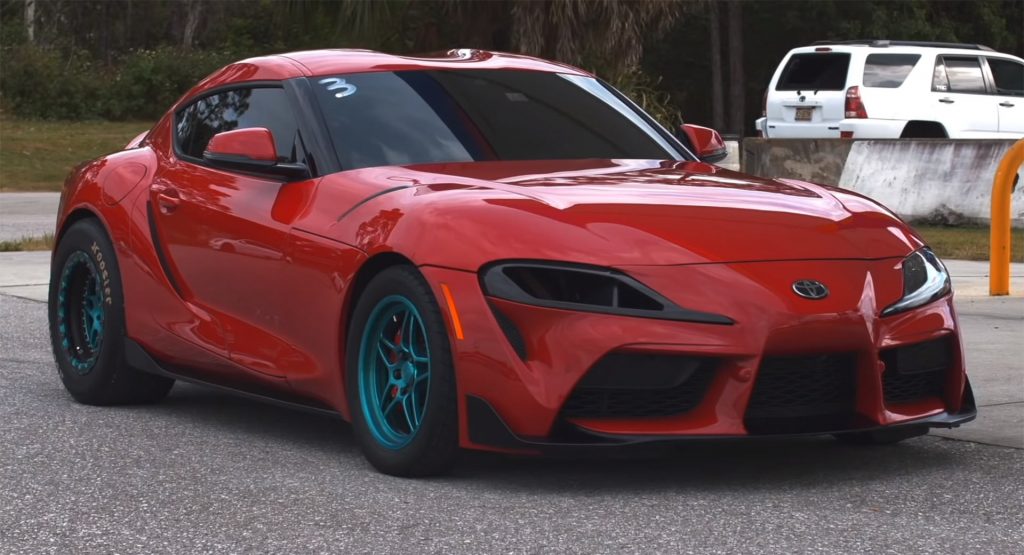 From the moment customer deliveries of the A90-generation Toyota Supra started, owners and aftermarket tuners have been looking for ways to boost power and improve performance. This particular Supra, owned by a couple in the U.S., lays claim to being the world’s fastest.

As you probably already know, the current Supra doesn’t feature a Toyota-developed engine like its predecessors and instead rocks BMW’s B58 six-cylinder. This is no bad thing, however, as this engine has already proven itself to be easy to modify while still remaining reliable.

This Supra enjoys a host of modifications that make it much faster than the stock model. For example, it includes an enlarged turbocharger, new pistons, rods, studs, and gaskets, while also rocking twin-stage nitrous with a 150 shot to get off the line and a 35 shot to run down the rest of the quarter-mile. There’s also a bespoke air intake in place of one of the headlights.

All up, the engine now pumps out 950 HP, or around 900 HP at the rear wheels. Helping put this power to the ground are aftermarket wheels with beadlocks in the rear and wrapped in sticky drag radial tires.

During a recent appearance at the Palm Beach International Raceway, the car recorded a handful of quarter-mile runs in the 8-second range, the quickest of which was an 8.78 second run at 153.02 mph. To put that into perspective, a standard A90 Supra runs the quarter-mile in about 12.5 seconds.