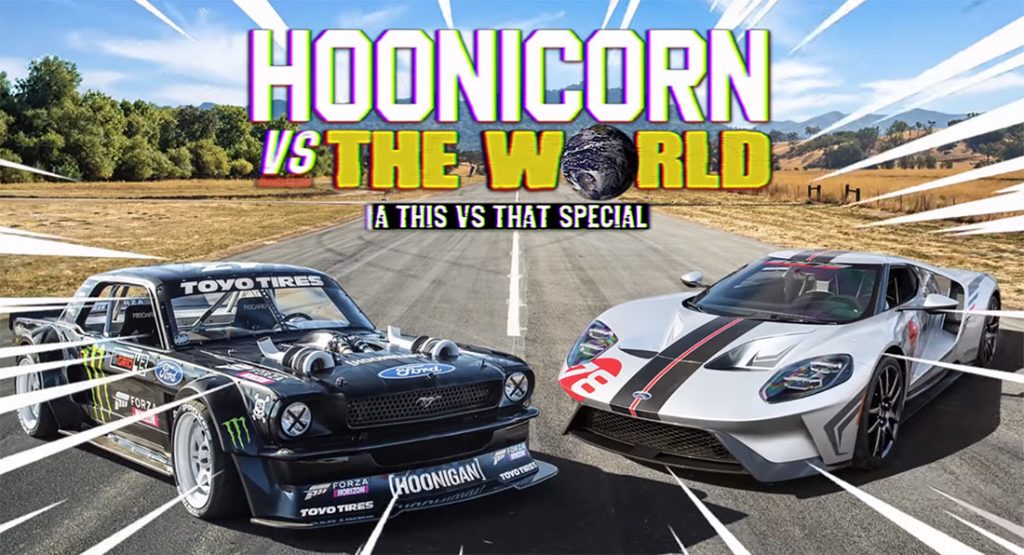 In the world of supercars, the 2019 Ford GT Carbon Edition is considered as one of the very finest, even though it is easily out-powered by some of its rivals. Despite this, the team at Hoonigan decided to pit it against Ken Block’s Hoonicorn, just to see how the two compare.

The Ford GT in question is owned by the founder of Borla exhausts and therefore features one of the company’s special exhaust systems. It is also clad in some special stickers that make it stand out from all other GTs but apart from, offers largely the same performance.

Slotted beneath the lightweight bodywork of the GT is a twin-turbocharged 3.5-liter EcoBoost V6 engine that delivers 647 hp although with the Borla exhaust system, this car probably has a touch more grunt.

As the Carbon Edition is marketed as a more track-focused variant of the mid-engined supercar, it weighs 18 kg (40 lbs) less due to the fitment of a polycarbonate rear hatch with extra venting, carbon fiber wheels, and titanium lug nuts.

By comparison, the Hoonicorn features a bespoke Roush Yates V8 with twin turbochargers and pumping out an extraordinary 1,400 hp.

In a straight-line, it should come as no surprise that Block is able to easily out-sprint the Ford GT in his custom Mustang but the GT is given a significant advantage in the final race that actually delivers a surprisingly close result.