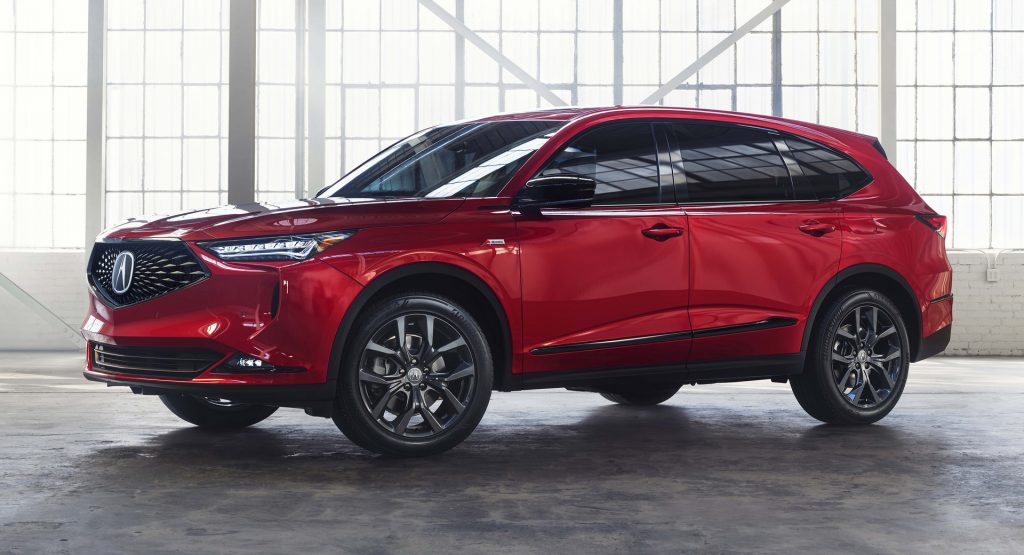 Just as promised, Acura has revealed the all-new MDX, the fourth generation of the company’s flagship three-row SUV following a thinly-veiled preview back in October.

Compared to the outgoing model, the 2022 Acura MDX is 1.4 inches wider and features a 2.8-inches longer wheelbase but the most significant dimensional change is the dash-to-axle ratio, which has been extended by nearly 6 inches.

Read Also: Acura’s Next-Gen MDX Has Been 20 Years In The Making

This has given the new 2022 Acura MDX its “cab rearward” proportions and made the bonnet line significantly longer. The wheels are also bigger and have been pushed to the edges of the bodywork, giving the new MDX a very dynamic appearance.

An all-new platform for an all-new MDX

Of course, these changes were made possible thanks to the brand’s all-new light truck platform, which was designed from the outset to provide Type S-levels of performance. For the first time in the history of the model, the MDX now sports a front double-wishbone suspension, combined with a multilink rear end, showcasing Acura’s determination to offer a more precise and engaging handling character, as well as an improved ride quality and comfort levels.

At the front, the new cast aluminum housing of the dampers is 45 percent stiffer for better noise isolation while the new front subframe is rigid-mounted, instead of the outgoing model’s floating-type subframe, for better handling. In addition, the rear body uses a new dual-balanced load path for the damper mounting points, contributing to a 41 percent increase in stiffness for better noise isolation and 80 percent torsion improvement which further improves the handling. 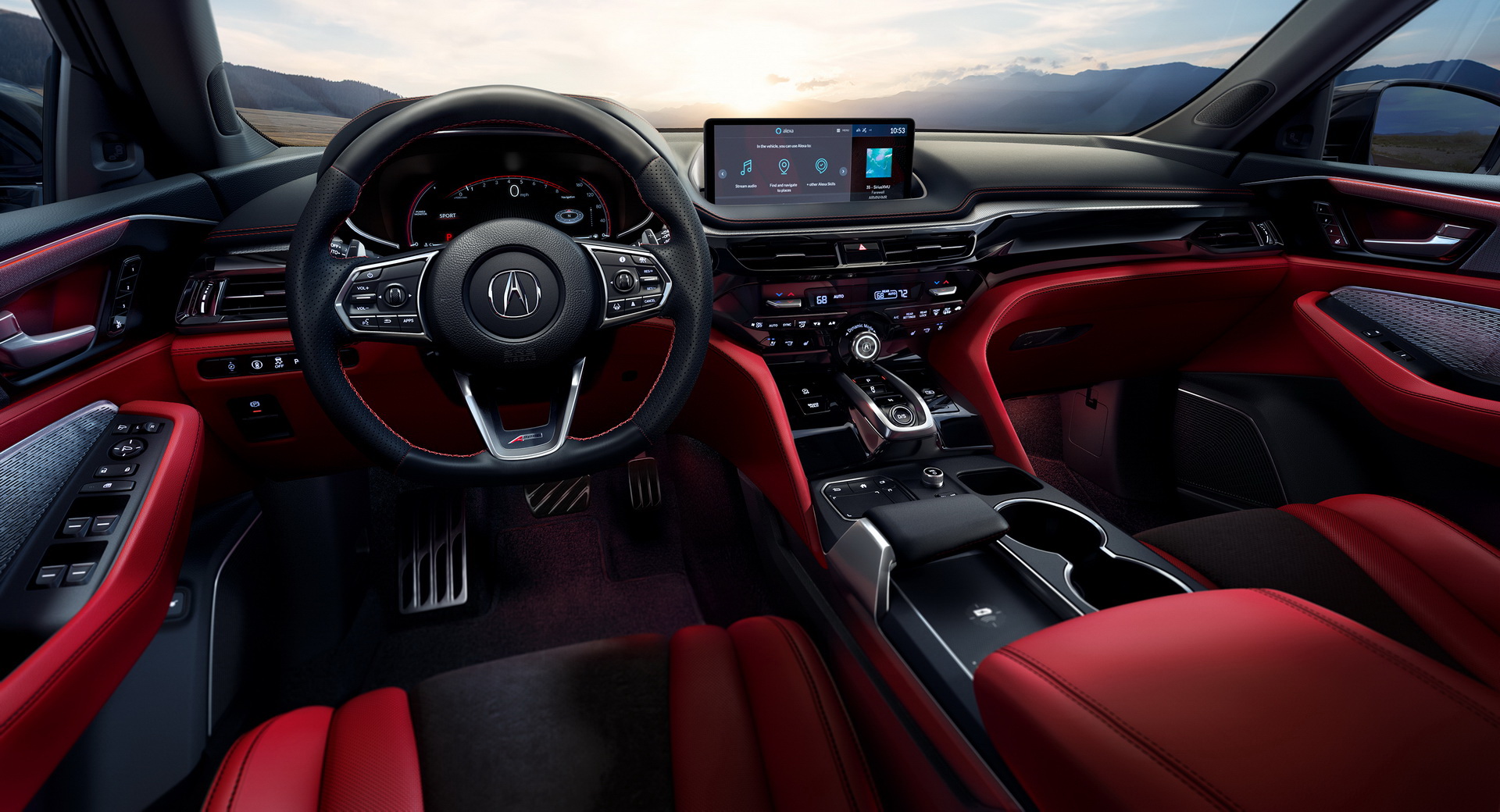 Open the door and you will be treated to the “most premium and sophisticated cabin Acura has ever designed”. High-quality materials like open-pore wood, brushed aluminum, and soft-touch Milano leather are all present and there’s the option to even have the instrument panel wrapped in leather. Acura will offer six different color schemes, including Ebony, Parchment, Graystone, and Espresso. A-Spec models will be offered exclusively in either Ebony or red leather with black Ultrasuede inserts. 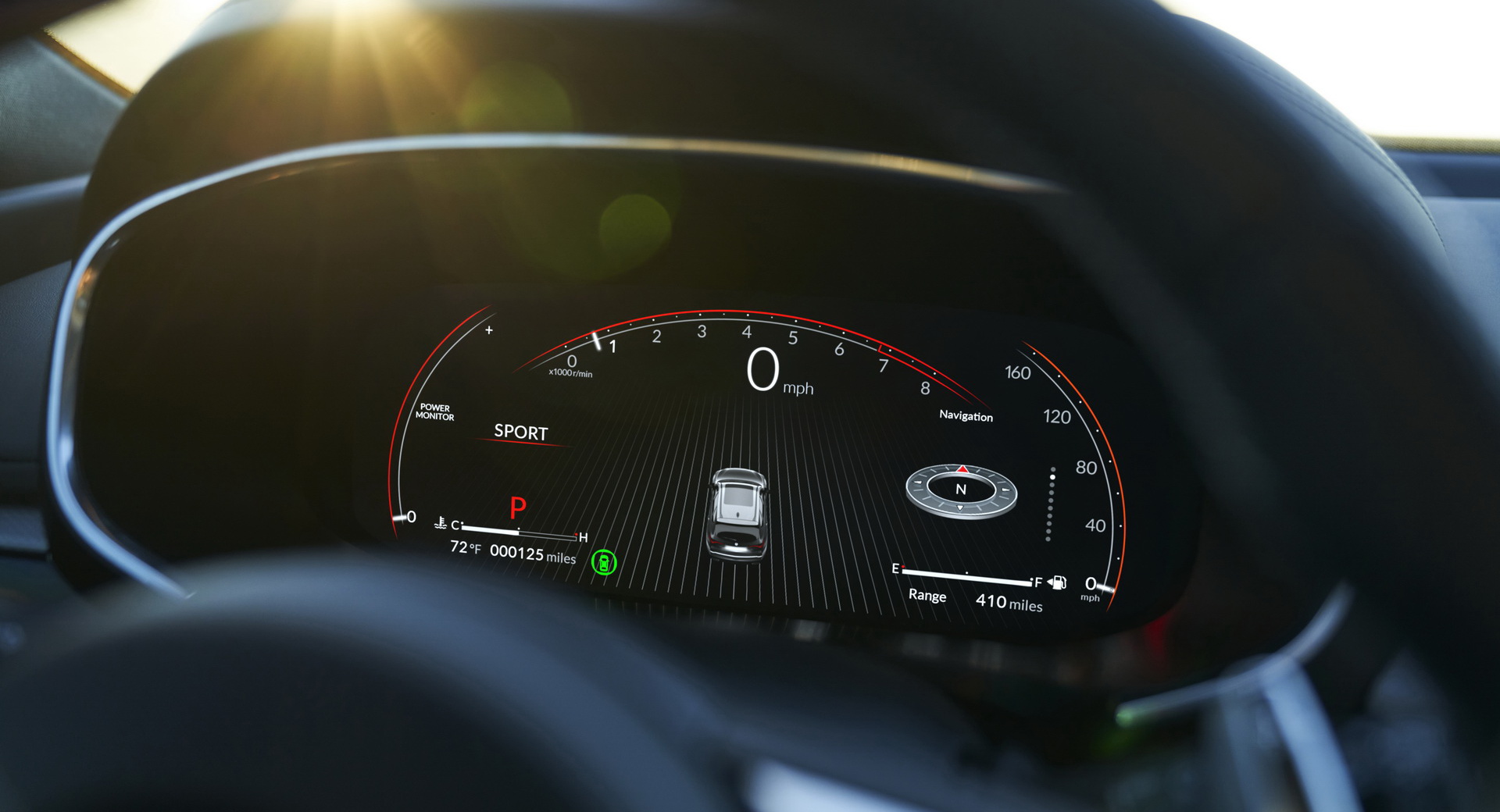 Room for up to seven passengers

With every seat in its upward position, the new MDX offers room for up to seven passengers. The new 2022 Acura MDX also features a first-in-class multifunction removable center seat in the second row, transforming from a traditional 3-seat bench to a dual captain’s chair setup with a wide armrest in the middle or a wide passthrough for easier access to the third row. 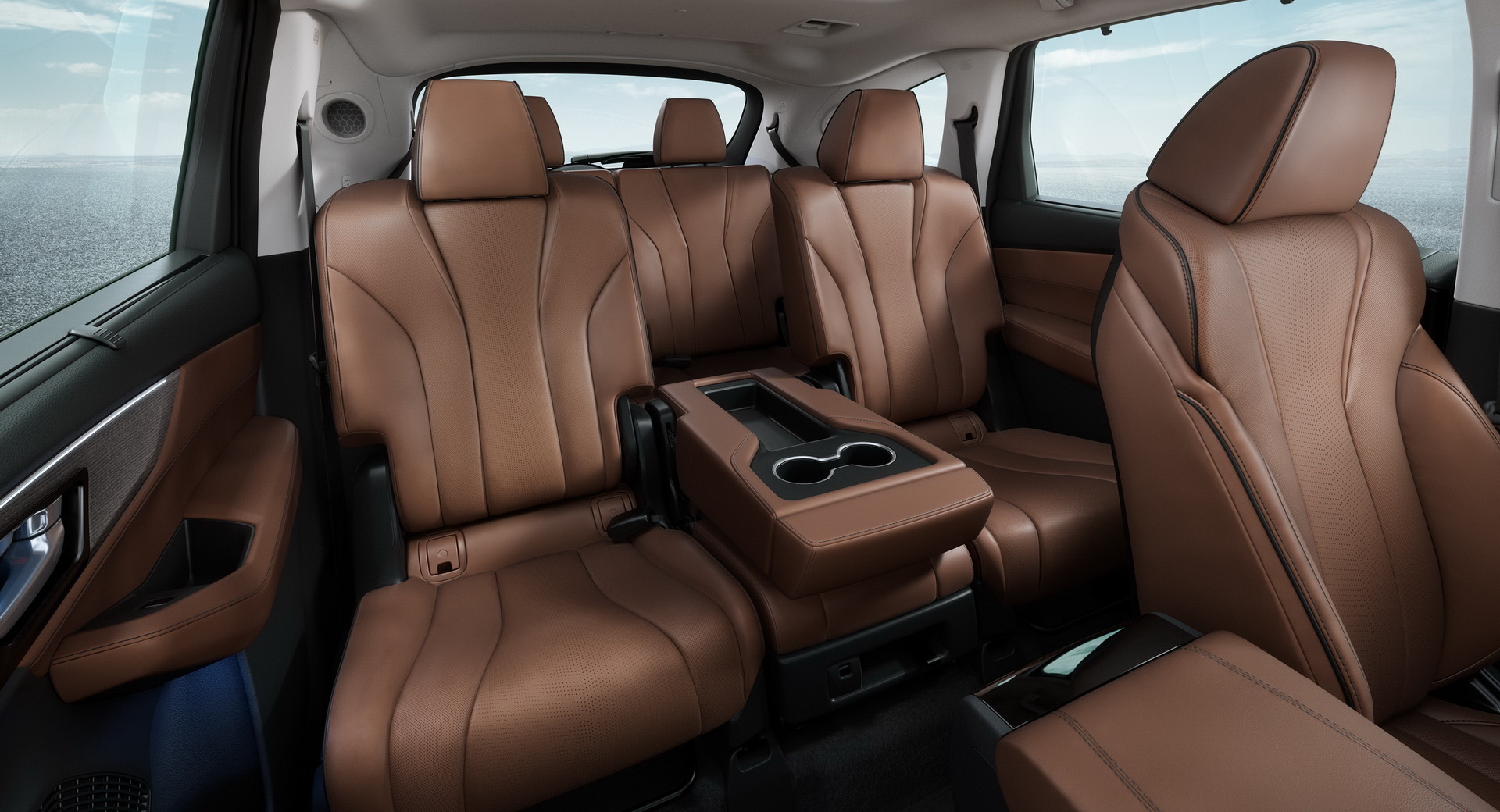 Acura claims that the third row in the new MDX is now roomier, offering an additional 0.4 inches of headroom and an extra 2.4 inches of legroom, as well as a seating position that’s 2 inches higher from the floor compared to the outgoing model. Add to that the standard panoramic sunroof across the range and even passengers in the third row will enjoy a light and spacious feeling.

Customers will be offered initially just one engine option; Acura’s 3.5-liter i-VTEC V6 unit paired to a 10-speed automatic transmission with paddle shifters, producing 290 HP and 267 lb-ft of torque. Front-wheel drive will be standard, with Acura’s Torque Vectoring SH-AWD system being an option.

The rear-biased Super Handling All-Wheel Drive system enters its fourth generation, featuring 40 percent more rear torque capacity and 30 percent quicker front-to-rear torque transfer than the system in the previous MDX. All in all, Acura’s SH-AWD system can transfer up to 70 percent of the torque to the rear axle while distributing up to 100 percent of that rear torque between either the left or right wheel. The result is even sharper handling and a more accurate turn-in, offering improved traceability when cornering as well. 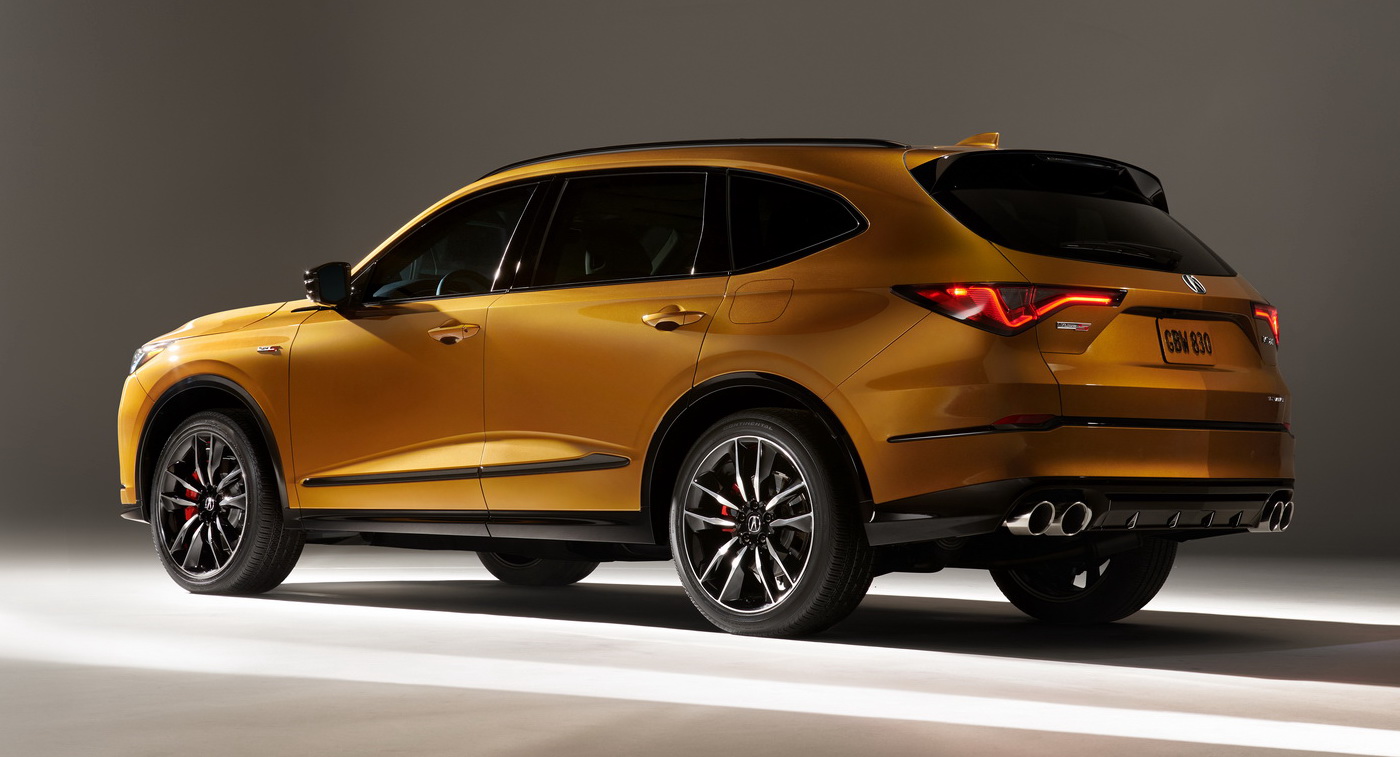 Those wishing to take full advantage of Acura’s trick AWD system should wait until the summer of 2021 when the company is going to launch the range-topping MDX Type S. This will be powered by the brand’s all-new turbocharged 3.0-liter V6 engine, producing an estimated 355 HP and 354 lb-ft of torque.

The sportiest member of the new MDX family will ride on 21-inch wheels shod in 275-series tires and will feature larger brakes with four-piston Brembo front calipers. The Acura MDX Type S will also sport an open-diamond front grille, quad exhaust tips, and lots of gloss black trim that will replace the standard chrome.

The first examples of the 2022 Acura MDX will arrive at dealers across the US on February 2, with prices starting at $46,900 for the entry-level FWD MDX and from $48,900 for the MDX with SH-AWD.