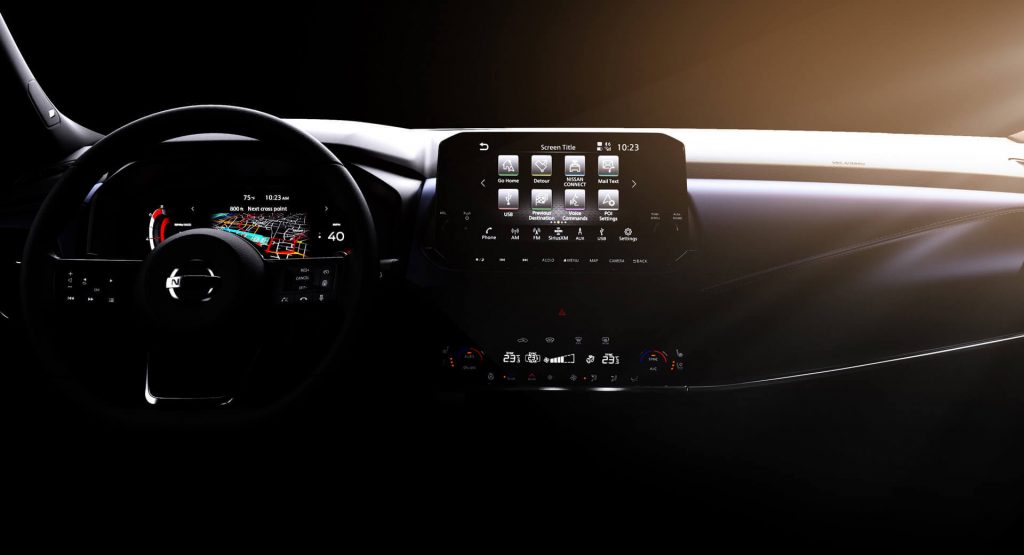 The second generation Qashqai, which has been around since 2013, has aged quite nicely. However, Nissan won’t be resting on its laurels for much longer, as they are readying its successor.

The all-new Qashqai, which will arrive in North America as the Rogue Sport, has officially opened up its cabin for the camera, with the automaker releasing a few teaser images that reveal a new design and some technology features.

The dashboard panel looks like an evolution of the current iteration, yet the infotainment system has moved further up. Sporting a 9-inch display, it provides access to the navigation, smartphone connectivity and music. There is also a 12.3-inch TFT display behind the redesigned steering wheel, and high-end models will also get a 10.8-inch head-up display, which Nissan says that it is the biggest in the segment in terms of the image size.

A 15W wireless charging pad is also on deck, and the tray can accommodate even the biggest smartphones. Other goodies include the Nappa leather upholstery, massage function for the front seats, heated seats and steering wheel, white ambient lighting, Bose audio, Wi-Fi for up to 7 devices and the NissanConnect Services.

The dedicated app allows owners to interact with the car, and can be set-up to receive alerts for the speed, time and zone. There is also a Vehicle Health report available through the app, and users can analyze their driving history too. Stolen Vehicle Tracking has been introduced as well, alongside a 24/7 assistance provider that, unlike the regular eCall, does not get accidentally triggered, apparently.

Nissan claims the front, side and rear visibility has been enhanced in the new Qashqai, which also has a longer wheelbase that frees up more space for backseat occupants.

The new ergonomically designed doorways facilitate easier ingress and egress. There are more storage spaces inside and a 74-liter (2.6 cu-ft) larger luggage compartment, with dual illumination, a 12-volt socket and an electric tailgate.

Production of the Euro-spec will take place at the Sunderland factory in the UK, while the official presentation of the vehicle is expected to take place early next year.