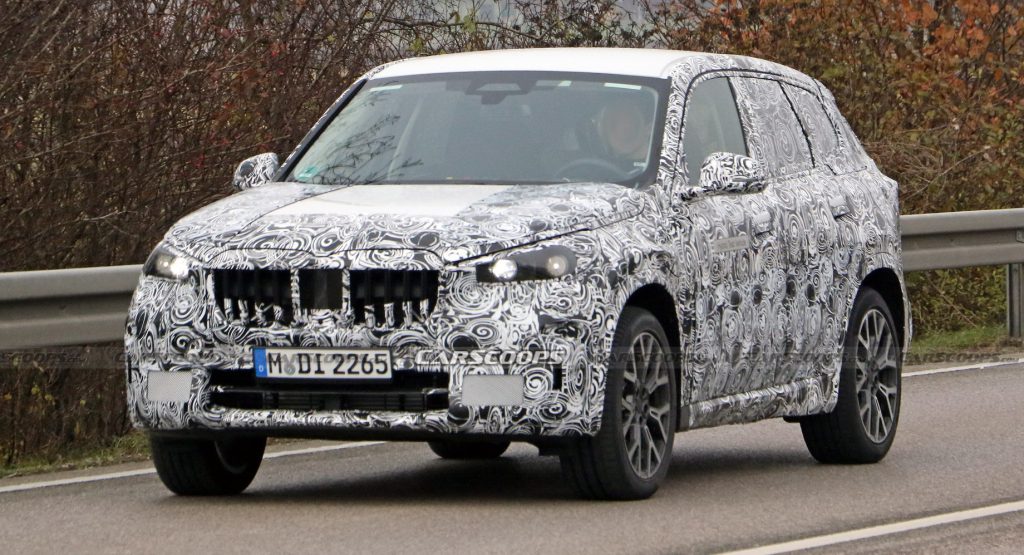 Following the regular 2023 BMW X1 in the original version of this post and the pure-electric iX1 (see here) nabbed last month, our spies have photographed the plug-in hybrid version of the third generation subcompact luxury (or plain compact-sized) SUV. The powertrain is given away by the mandatory hybrid sticker on the doors and at the back.

Meanwhile, BMW has confirmed that production of the petrol, diesel and plug-in hybrid variants of the new X1 will commence in 2022 with the all-electric iX1 expected a year later. [Updated 12/6/2020]

Spotted by our photographers in southern Europe, the third-generation X1 in conventional gasoline and diesel variants continues to features heavy camouflage and plastic padding in some areas. As a result, guessing its final shape is not that easy, though one thing is very clear: the new BMW X1 will feature bigger kidney grilles.

Chances are they won’t be as controversial as those BMW has fitted to the new 4 Series family as the grilles don’t reach as far downward. They are clearly wider than on the current model.

The headlights and taillights are partially covered by camouflage, though it doesn’t seem like they are the finished items. Thus, guessing their shape is very difficult at this point. We’ll have plenty of time to see BMW X1 prototypes testing with less camouflage as the model is expected to debut in late 2022, which means it will debut for the 2023 in North America.

Developed under the U11 codename, the 2023 BMW X1 will use the same FWD-based platform as the next-generation 2 Series Active Tourer MPV. The compact luxury SUV is expected to offer internal combustion engines, plug-in hybrid powertrains and, for the first time, a fully electric variant. The latter is likely to be called the iX1. The test prototype you see in these images features an internal combustion engine, though, as suggested by the exhaust visible under the rear bumper.

We still don’t get a look at the interior but the SUV is said to feature an ultra-minimalist dashboard with a curved digital instrument panel, simple ergonomics and many environmentally-friendly materials. This sounds a lot like what we’ve already seen inside prototypes of the second-generation 2 Series Active Tourer.