A man in the Russian port city of Vladivostok has escaped a brush with death after a slab of concrete smashed into his parked Nissan X-Trail.

CCTV footage shows the 27-year-old man clearing ice from the windshield of his X-Trail. He suddenly looks up and moments later, a brick can be seen hitting the front of his vehicle. Immediately afterwards, a slab of concrete that reportedly measured 8ft by 4ft slammed into the roof of the Nissan, completely destroying the SUV and missing the man by less than a couple of feet.

It is claimed that the slab, which fell from the side of the building’s ninth floor, weighed approximately two tons. Not only was the man lucky to escape, but his 26-year-old wife, Darya Ponomarenko-Zhuk, was also fortunate to not have been injured as she had only just gone inside to get some hot water to help clear the windshield.

In Vladivostok, a man was removing ice from his windshield when all of a sudden he heard a noise and took cover. A two ton slab of concrete came loose and fell from above barely missing him but leaving his automobile totally wrecked. pic.twitter.com/n8qpVSoj7Z

Footage taken in the aftermath of the freak incident shows the massive concrete slab left the X-Trail a mangled mess, destroying the roof and almost splitting the SUV in two. Had the 27-year-old not noticed the falling piece of concrete or been inside the X-Trail at the time, he would have almost certainly been very seriously injured or even killed.

The incident happened after a powerful ice storm lashed the city, bringing with it freezing rain that covered Vladivostok and forcing regional officials to declare a state of emergency. The ice storm left approximately 60,000 residents without power and, according to RFERL, the ice that covered the city was up to 12 mm thick. 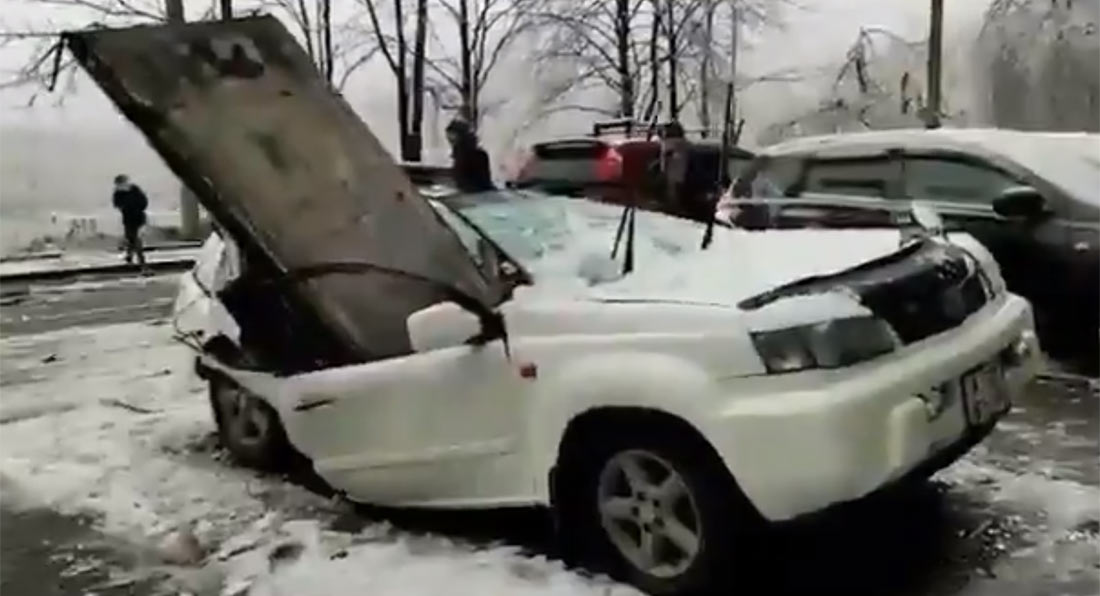