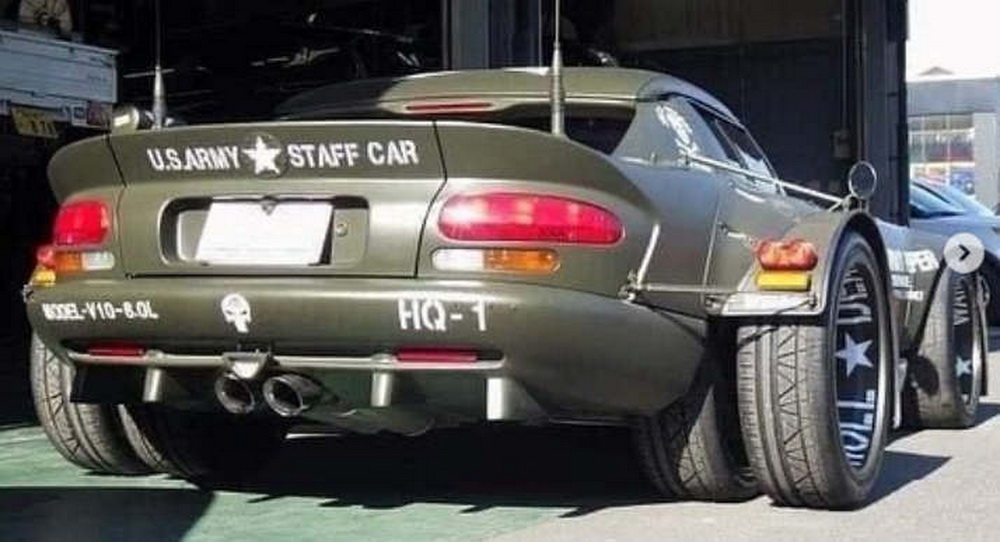 In Japan there’s a Dodge Viper unlike any other. In fact, it may well be the craziest example anywhere on earth.

This particular Viper has been rolling around the Land of the Rising Sun for a number of years, but only recently came across our radar after a handful of images were posted to Instagram by 1320video.

Read Also: Take A Trip Down Memory Lane With This 1997 Dodge Viper Tuned By Hennessey

For starters, it is painted in a dark shade of matte green and has various U.S. Army stickers across the exterior. In a video filmed back in 2017, it looked largely the same as it does now, but as these new photos show, some additional modifications have been made.

Beyond the paint, one of the most obvious differences between this Viper and a standard one are the flared wheel arches. There is also an extended front splitter, a bespoke hood and front quarter panels with louvers, and a revised rear with a distinctive diffuser and modified exhausts. In 2017-specification, the car was sitting on a set of 20-inch wheels with massive 345/25 tires at the front and 475/25 tires at the rear.

In its most recent form, though, these gargantuan rear wheels have been replaced with a “dually” setup, like you would find on a full-size pickup truck. To house the additional rear wheels, the flared fenders now feature extensions that are so wide, they even feature their own brake lights and reflectors.

So, does this Viper stand out? Definitely. Does it look good, though? Well, what say you?