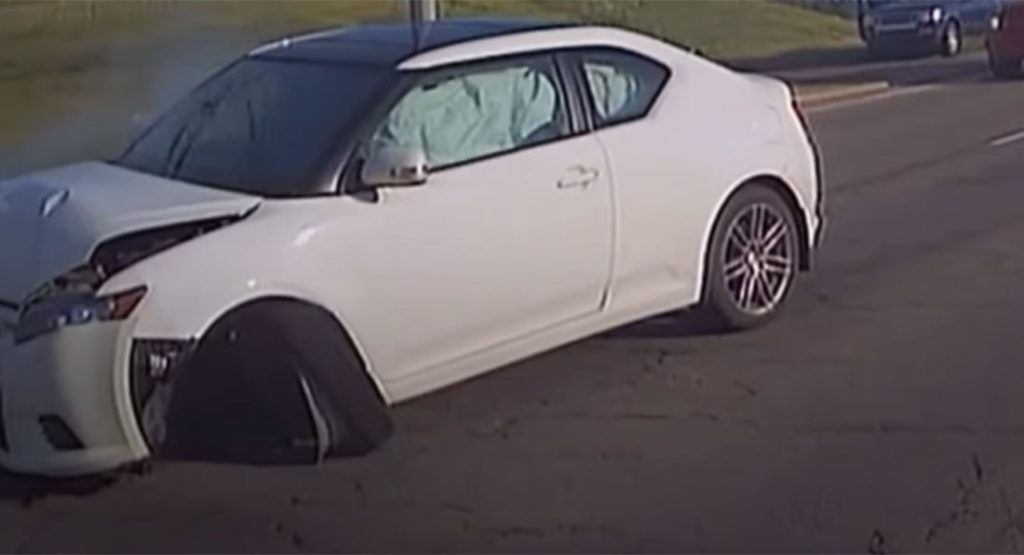 The driver of a white Scion tC has been caught on camera rear-ending a black SUV along a motorway in Calgary, Canada.

This incident happened back in August and the rear-facing camera initially shows the tC speeding along the motorway and overtaking various vehicles, including the cammer. Seconds later, the cammer’s car pulls up in front of the tC, revealing that it was involved in a heavy crash and has been wrecked. A look at the front-facing dashcam footage reveals exactly what happened.

As the driver of the Scion sped past the cammer, they slammed into the rear of a black SUV entering the motorway along a curved ramp. The force of this impact sent the SUV briefly into the other lane while the Scion hit the concrete barrier on the side of the motorway. The impacts were brutal and left the tC with some serious damage.

Most notably, the front of the two-door has been crumpled and both of the front wheels have almost been ripped off, while the airbags were also deployed. It is unclear how much damage the black SUV suffered, as its driver didn’t pull over to the side of the highway for several hundred feet and is almost out of view of the dashcam. Fortunately, a witness who saw the crash drove behind the SUV to offer their assistance.