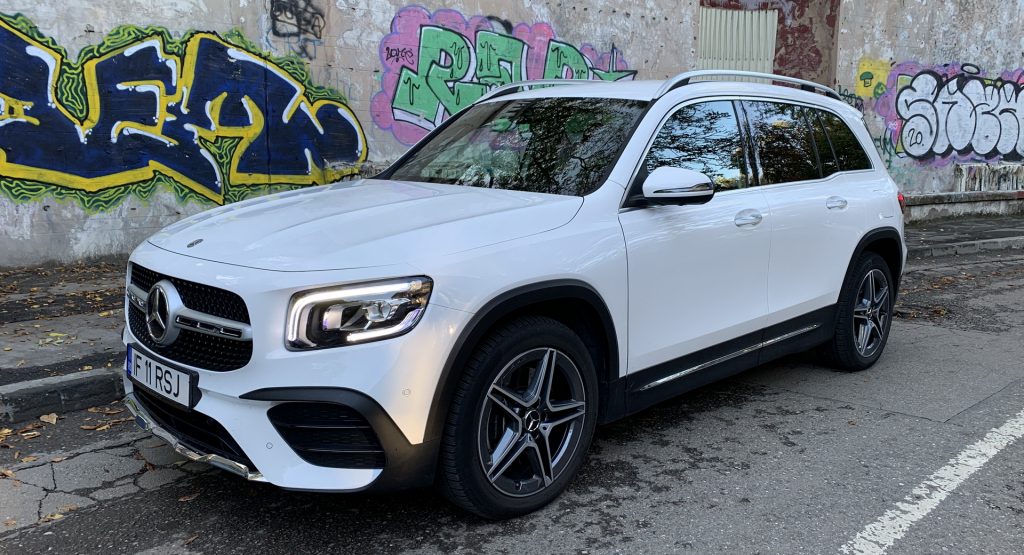 Imagine walking up to a brand new Mercedes GLB. Within seconds of getting in, you’re likely to shake your head at the very thought of spending more on something like a GLC, simply because of how roomy this sub-compact crossover is.

There is ample headroom and knee room throughout, and you can even get it with seven seats should you so desire. It also has a larger trunk than the more expensive GLC – and by quite a lot if you fold the rear seat.

Now you’re probably thinking that this sounds almost too good to be true and that all prospective buyers should drop whatever they’re doing and get themselves a 2020 GLB simply because it’s the smart, practical thing to do.

Read Also: Brabus Does Its Tuning Thing To The New Mercedes-Benz GLB

In a way, it would be a bit like talking yourself into buying the BMW 3-Series Gran Turismo when it first came out because of how practical and roomy it was. And here’s the problem: while not quite as dynamic as the regular 3-Series sedan or wagon, the GT still drove like a BMW. The GLB only kind of drives like a Mercedes, and it wouldn’t be overstating to say that it’s the least pleasant to drive Benz passenger car currently on sale.

Is this a handsome car?

Let’s start with what we can see, since that’s usually how a first impression goes. The looks of the GLB can be characterized as somewhat controversial. It actually has a couple of good angles, but for me personally, it just doesn’t look very stylish or expensive. 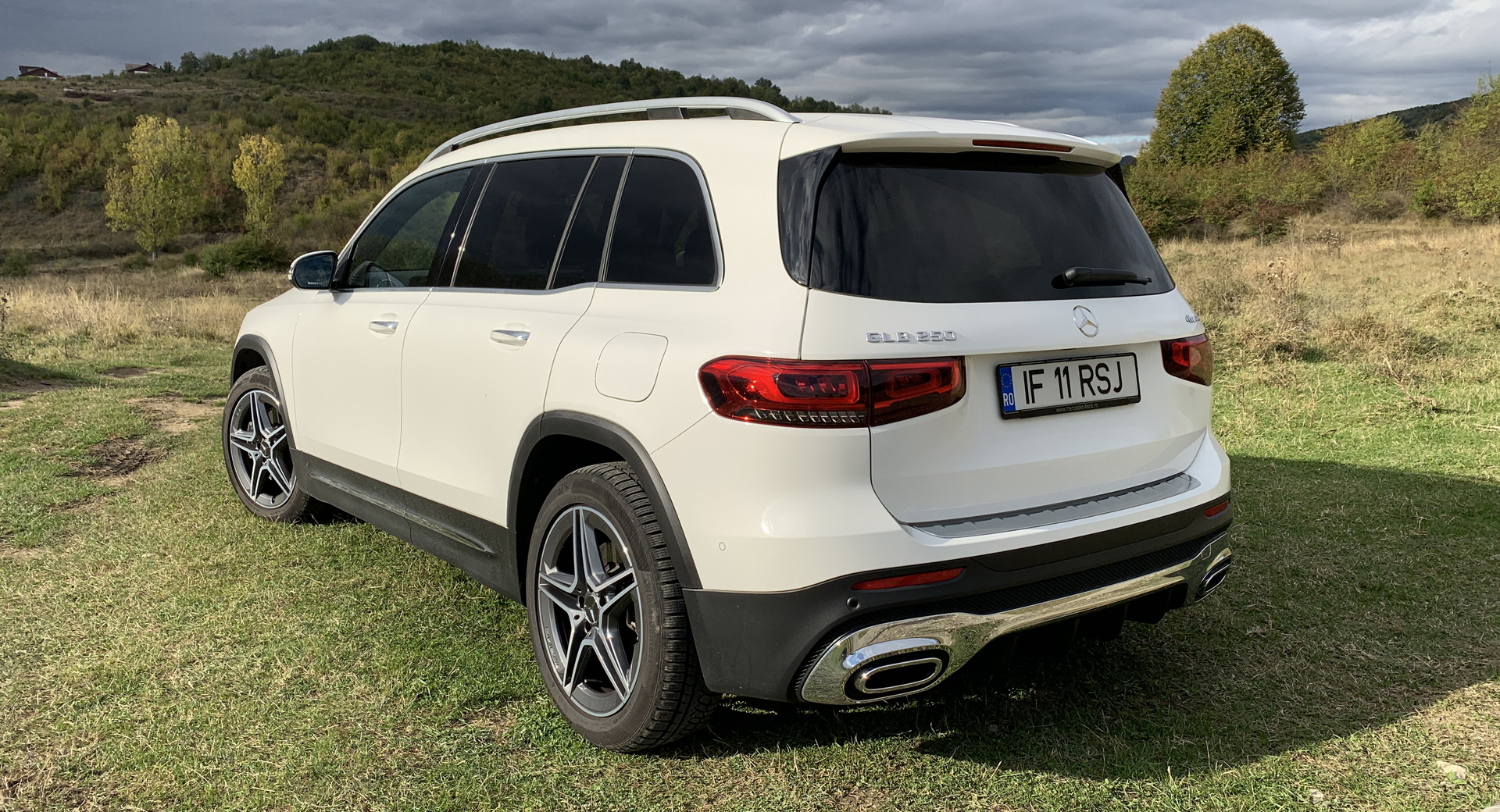 If you like that sort of thing then great, there’s nothing wrong with a rugged-looking crossover. The GLB however simply walks that fine line and doesn’t seem to cross it on either side. It’s just kind of neutral.

This is usually the part where I’d comment about the AMG Line package, which adds the beefy bumpers, sports steering wheel, 19-inch AMG 5-spoke wheels and so on. If you’re buying a Mercedes-Benz, usually you can’t go wrong with AMG exterior styling. In case of the GLB however, it’s weirdly better off without it, because it just makes it look even more boxy.

Never mind all that, tell me how roomy it is 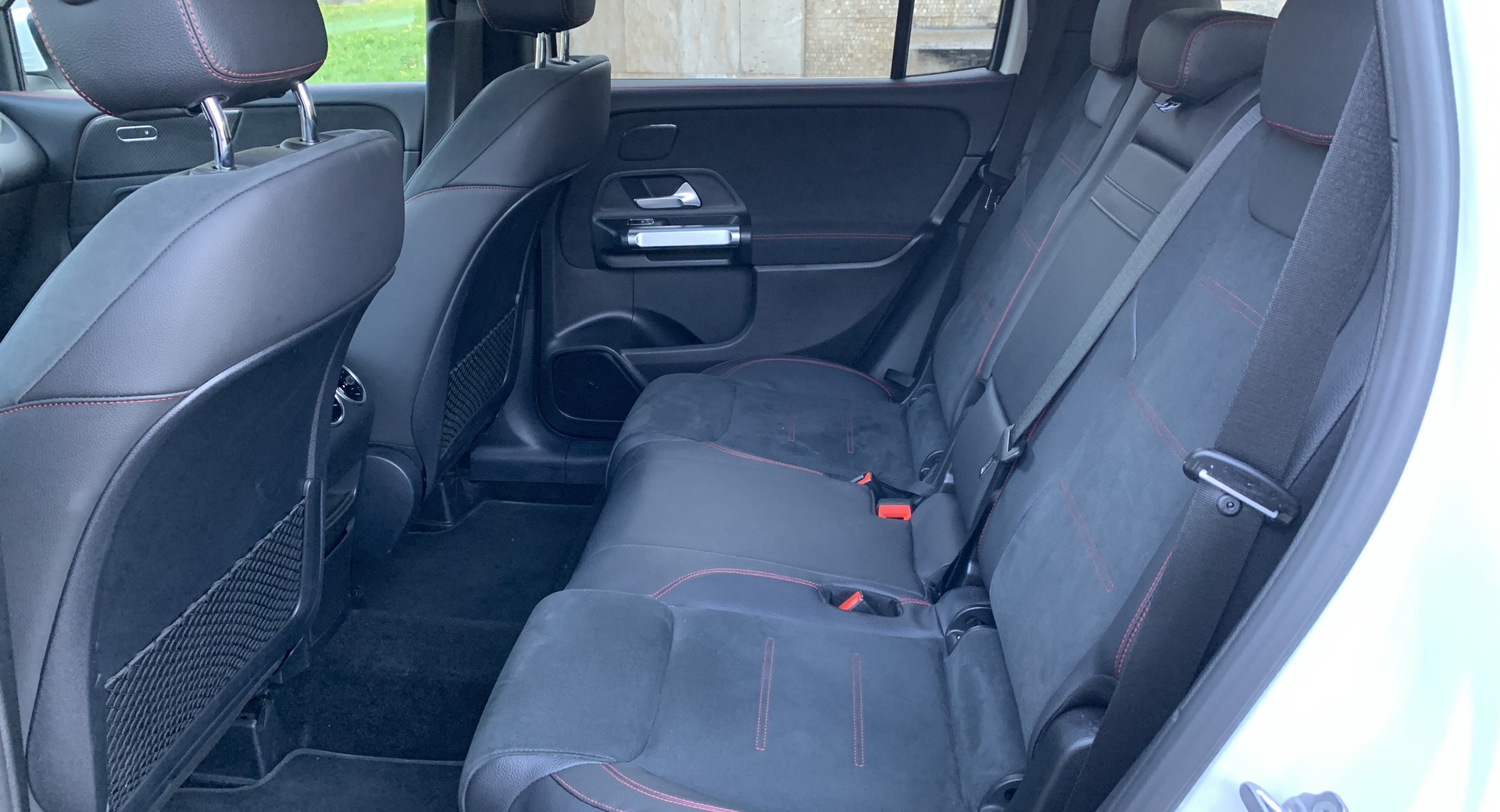 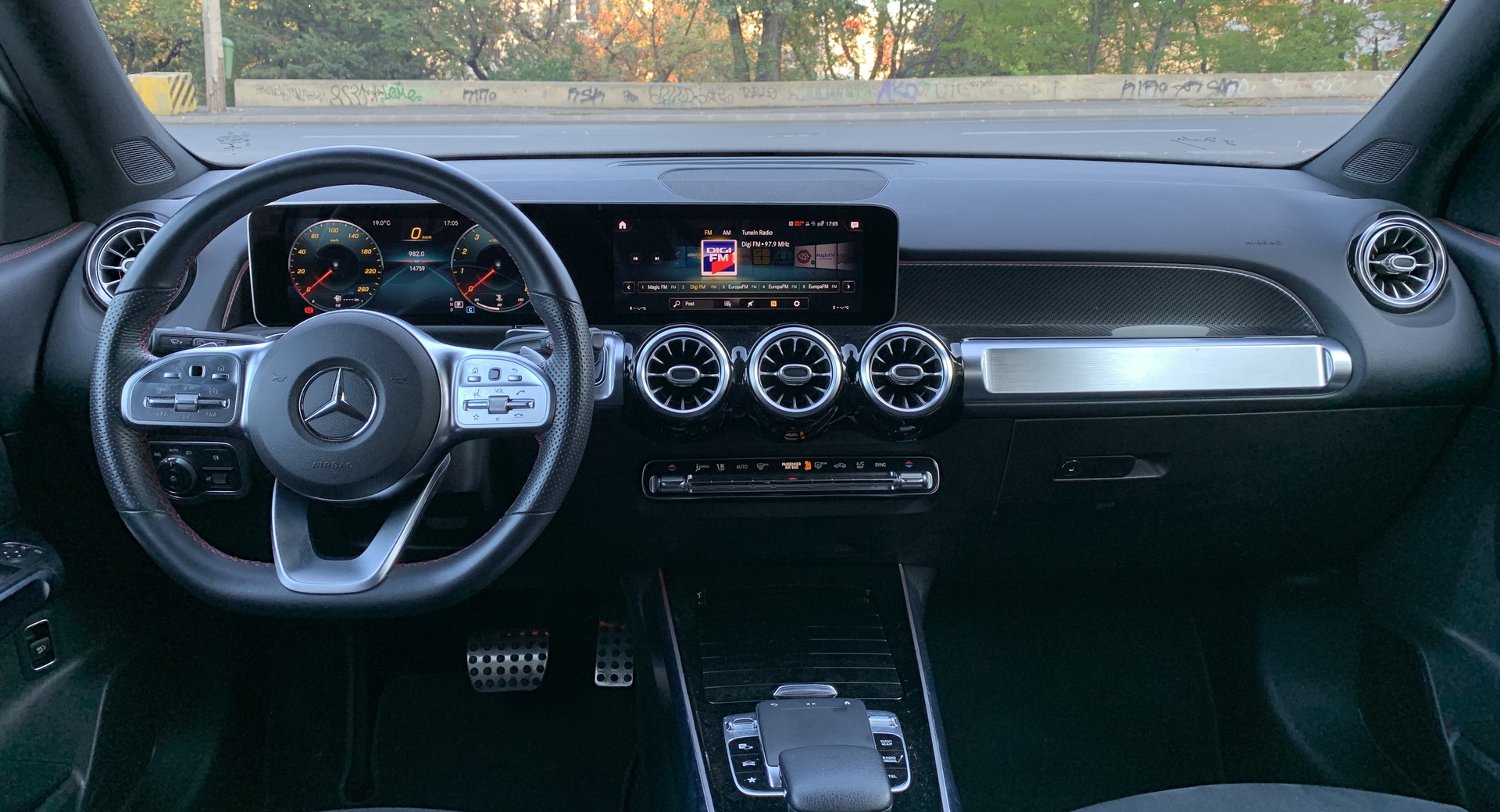 In fact, the GLB 250 and 250 4MATIC are the only two versions available in the states, and even if you load the latter up with all of the options we had on our tester, it would only cost about $46,500.

However, we would definitely recommend ticking as few options as possible, especially since this isn’t one of Mercedes’ finest interiors when it comes to overall build quality.

On paper, the GLB 250 4MATIC has enough pulling power for everyday use. Its four-cylinder, 2.0-liter turbocharged gasoline unit puts down 221 HP (224 PS) and 258 lb-ft (350 Nm) of torque and is mated to an eight-speed automatic gearbox and an all-wheel drive system.

It needs 6.9 seconds to hit 60 mph (96 km/h) and will max out at 146 mph (236 km/h). While it never really feels underpowered, it will take a while to find a good balance for the throttle, even in Comfort mode. So in the city, you’ll often find yourself revving the engine way more than you would have liked to even though you’re not really giving it that much throttle. 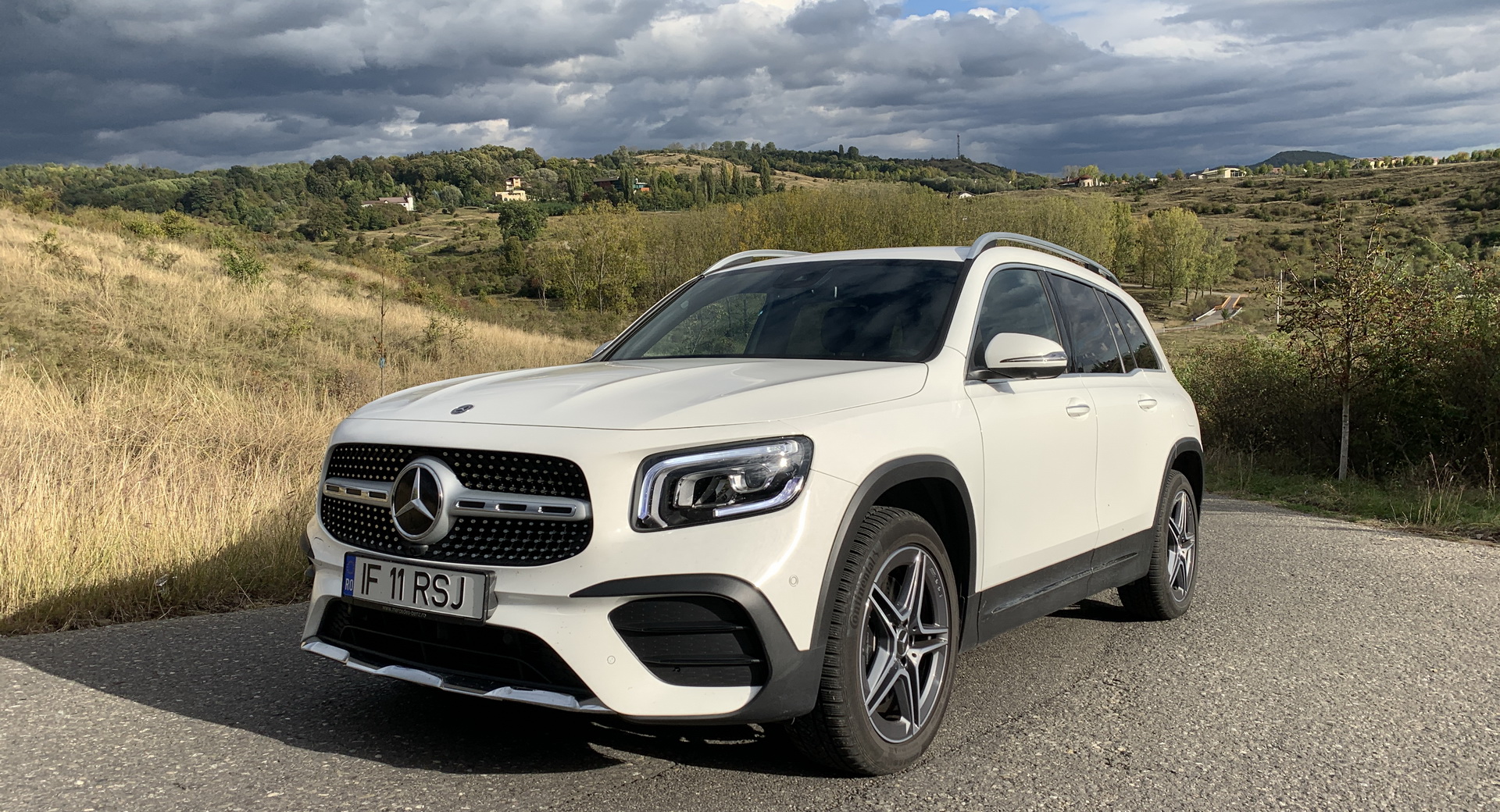 As for the ride, earlier I said the GLB only kind of drives like a Mercedes – and here’s why. It soaks up bumps well enough and while it actually handles and grips pretty OK if you’re cornering more aggressively in Dynamic mode, there is an initial body roll that you’ll have to overcome, or at least come to terms with early on. This is not a fun crossover to drive by any stretch of the imagination and it actually feels bigger than it really is when you’re on the move. Guess its height doesn’t help with that.

Is it a better buy than the GLA or GLC?

From a value standpoint, if you need the room, then yes. It absolutely demolishes the GLA in terms of practicality thanks to the longer wheelbase and higher roof line, while outshining the GLC in a few important ways too. If you live in Europe, skip any of the inline-4 turbo gasoline engines and go for a diesel, preferably the GLB 200d or 220d.