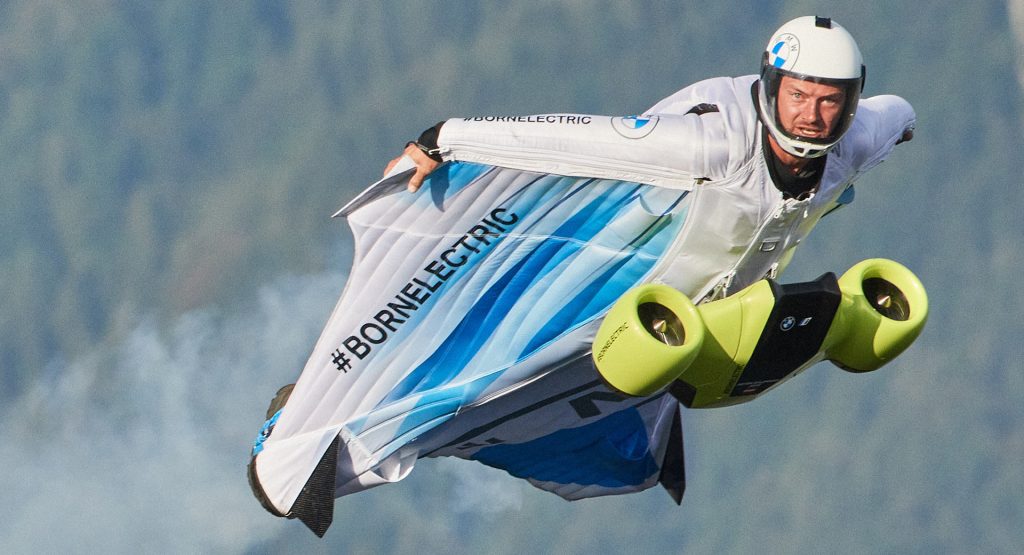 BMW i and Designworks have teamed up to create a rather unique electric vehicle – a wingsuit.

Designed to allow for higher speeds and increased flying times, the electric wingsuit features two carbon fiber impellers which are each powered by a 10 hp (7.5 kW / 10 PS) electric motor.

The impellers spin at approximately 25,000 rpm and can run for approximately five minutes. They’re powered by a battery and the whole system hangs from the front of the wingsuit at chest level.

The project was three years in the making, and Austrian base jumper and skydiver Peter Salzmann played an important role in its design and development. Speaking of the latter, the system was subjected to numerous wind tunnel tests.

Salzmann recently took flight with the wingsuit and said pilots will experience “immediate acceleration, allowing them to fly at speeds of more than 186 mph (300 km/h).” During the test, Salzmann and two others – in traditional wingsuits – were flown to a height of 9,842 feet (3,000 meters) where they jumped from a helicopter. BMW says the electric wingsuit enabled Salzmann to accelerate faster than his colleagues and “fly across the [mountain] peak in steep flight.”

The wingsuit was revealed as part of the build up to BMW’s #NEXTGen event where they will unveil the iNext. The electric crossover will be introduced on November 11th and be followed by a mysterious MINI on the 17th.