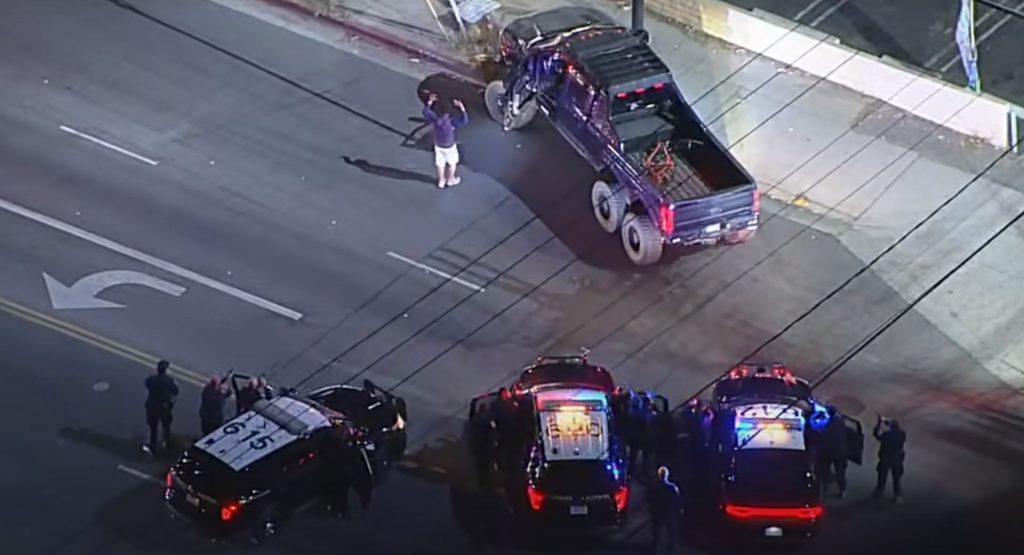 According to CBS Los Angeles, the heavily modified Ford F-550 belonged to DJ Marshmello and was stolen from a dealership in Van Nuys between 6:30 and 7 p.m.

Police told the station the thief rode a bicycle to the dealership and then threw his bike into the bed. He was then somehow able to get inside the truck and drive away.

A few hours later, the truck was spotted driving recklessly and deputies from the Los Angeles County Sheriff’s Department began pursuing it. The driver eventually made it onto the 101 Freeway and the California Highway Patrol took over the chase.

The video picks up from there and isn’t terribly interesting. However, it shows the truck crashing into a light pole after exiting a Taco Bell. The driver then exits the vehicle and is taken into custody without incident. It remains unclear why they stole the truck, but CBS Los Angeles reported the sheriff’s department said they might have been under the influence of drugs or alcohol.

The station also reported DJ Marshmello’s manager, Moe Shalizi, had the truck custom built for him last year. However, as The Drive noted, DJ Marshmello’s truck was – or still is – matte green, so they might not be the same vehicle.

It’s also worth mentioning that while the vehicle was initially reported to be a Hennessey Velociraptor 6×6, that’s not the case. Instead, Roadshow’s social media editor, Daniel Golson, noted it looks similar to a Diesel Brothers pickup that was introduced at SEMA in 2019.

Regardless of who owned and built it, the truck is probably one of the first 6x6s to be involved in a police chase.

I think it might be this exact Super Duty that the Diesel Brothers showed at SEMA last year… pic.twitter.com/JpKZ1WKh7D